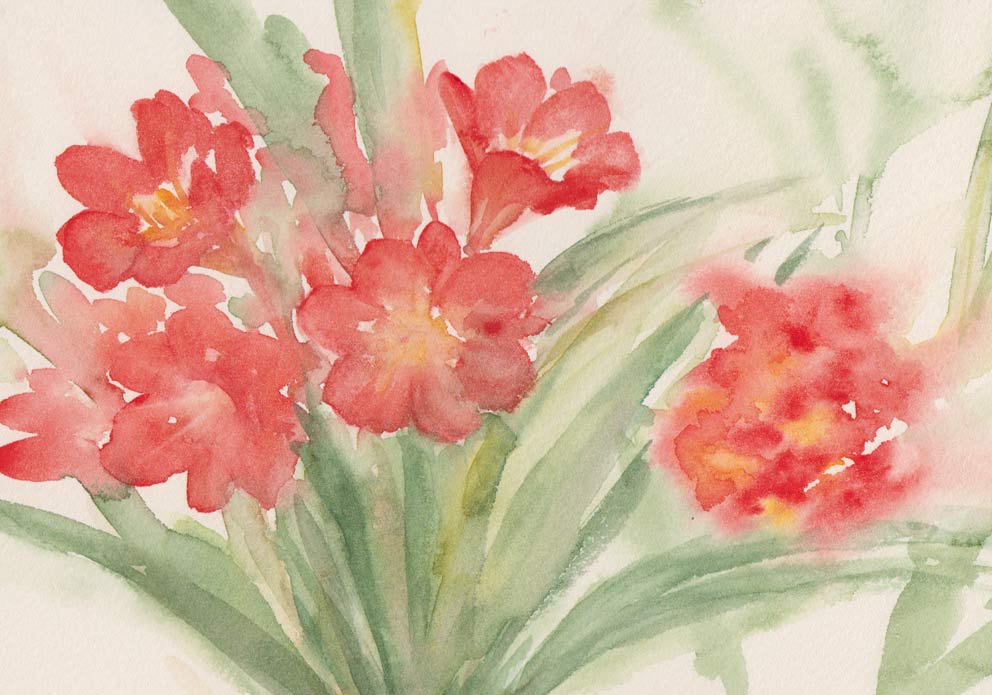 Based on my success following Jean Haines step by step Narcissi a few days ago I thought I’d try and transfer that learning to some flowers that we have blooming in our back garden at the moment – another unexpected flowering, these are a clump of brilliant orange and yellow flowers with glossy, dark green foliage I’ve recently learned are called Clivia Miniata. I believe they might also be known as Kaffir Lilies.

It wasn’t an entirely successful experiment… I’m trying hard not to be too critical, but I can’t help thinking it looks like a 5 year old was let loose with my paints! Very primitive, and I haven’t even managed to mix an orange, they look too red…  Anyway, I’m learning. I think maybe I should have started with a softer wash, however, there are three flower heads that show lots of promise and the secondary clump on the right has potential too.

My biggest lesson today is not to panic. I started to paint the first flower and instantly felt like I had to get them all down before the paint began to dry on the first, including all the greenery – and I hadn’t even considered a background at that point. Interestingly, my worst flower was actually the first one… yes, that one almost dead centre.

In the hours following my session I’ve thought about this a lot, and there really is no need to panic. Just because it’s loose doesn’t mean it should be uncontrolled – what I should have done is thought through the composition a bit more, laid down a light wash which filled some background in too, then tackled one flower at a time. And to prove it, (ha ha, famous last words coming up) – I’ll try it tomorrow 😛