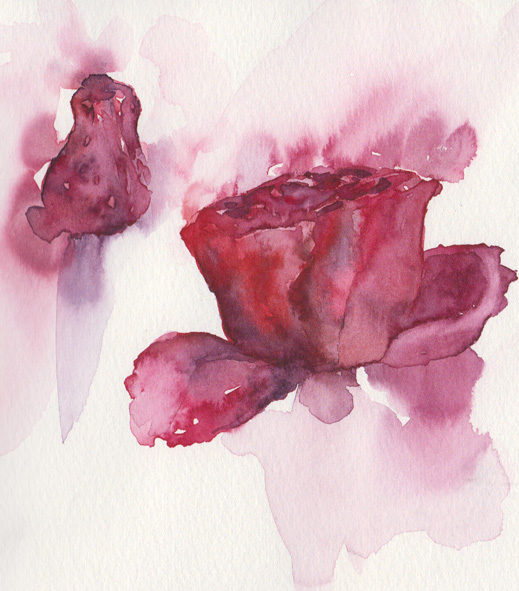 I can’t say that I’ve ever been a big fan of roses… I was a bit of a tomboy as a kid so flowers were off limits, I think having two brothers had something to do with that. You had to make sure you weren’t being a sissy, or girly, and so my favourite colour was blue – I did have some flowers, I had bright blue cornflower wallpaper when I was about 8 years old 🙂

I find it interesting that I’m now slowly letting go of some of the irrational things that ruled my life when I was younger. I haven’t worked out why this is happening, but I also never worked out why they were so important either, they just were.

When we moved into this house 18 months ago we decided to let the garden be for a year before ripping out or replacing anything, it was definitely an easy plan as we aren’t experienced gardeners. As a result I’ve now grown to love the roses that are in the front garden. We have three bushes in a row, all very different from each other, and the centre one is a long stemmed, deep, red velvet rose with the most sickly sweet perfume ever. It must be ancient, they don’t make them like that any more, do they?

These watercolour sketches don’t quite capture the depth of colour of the original, although they do have a papery feeling of pressed flowers, which is lovely. I still need to work out how I’m going to get darker and richer without losing any clarity, but at least it’ll give me an excuse to paint them again soon.