Finding your Focus by Letting it Go

I’m a bit disappointed that this week has quietly slipped away without any written updates… and almost without any painting at all, shared or not. It’s been busy, it’s been cold, wet and miserable and I started the week with a bit of a cold… however, on reflection I don’t think these were the reasons I haven’t been motivated. They certainly contributed, but they weren’t to blame.

So it’s Saturday again, a week since my last post, and it’s also been cold, wet and miserable again… but I let go a bit today, I stopped pushing myself and just let the day happen. I sat around and read, polished some brass (a DIY Ebay project that has been set aside for 2 weeks), walked the dog a couple of times, and eventually considered painting – there’s a bit of a story here too, my tablet stopped working a couple of days ago, and with it my easy access to reference photos, so I had to spend time printing before I could do anything. 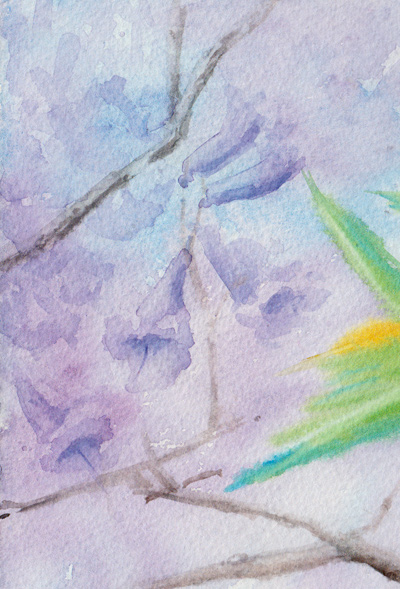 When I finally began to dabble it was on the Jacaranda & Lorikeet piece I started over a week ago – which is basically broken anyway after the first clump of blossom got overworked and heavy (detail left). A good thing to do some practise strokes on…

…something odd happened, without a plan and just a bit of a purple/blue colour mixed, my brush just skipped over the paper. I made two strokes and stopped, smoothed one edge away with a little water. Stopped again… Tried another one, waited. Then walked away for a while.

The difference between these flowers and the previous set is quite striking… with the first ones I recognised they would be difficult as they’re so delicate and I tried really hard to get the shape right, to observe the light & shade and the form of the blossom and was frustrated even as I was painting that it wasn’t working. I left them and returned several times to try and improve them and made it worse each time.

But today… I think I had simply let go of the concentrated focus I was holding, that I’ve been holding for the past week or two in fact. And today I allowed myself time to do things for the sheer enjoyment of doing them instead of to achieve a result.