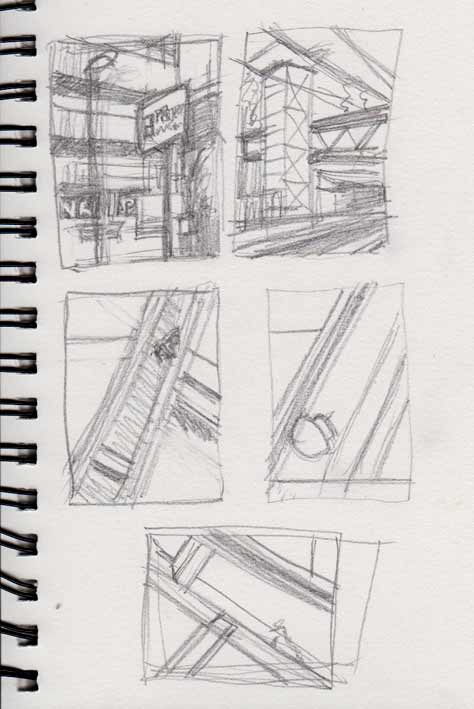 We have a Members Show coming up at the beginning of June (for Project Gallery) & I’ve been trying to think what I could paint for it… I realised there isn’t long left to decide on a subject and get it done. The topic is My Illawarra: An Urban Landscape, which poses two challenges for me – I don’t know the Illawarra at all and I have an aversion to painting buildings & things with straight edges.

I’ve only been visiting the area since I’ve been volunteering at the Gallery and usually I’m just rushing between there and the station along a street that doesn’t have much aesthetic appeal at all. So that gives me a couple of options – paint the gallery, or paint the station 🙂 .

On my last trip I took a few photos of both and today I’ve been trying to rough out some compositions… something I admit I don’t usually do (you can probably tell) because I hate doing it. I don’t know why but I really don’t like doing thumbnails or trying to think of variations, my shoulders hunch up, my knuckles go white & I don’t enjoy it at all. Even with these pictured here there’s only one version of each. Actually, I did manage three of the last idea which is a swallow in the rafters of the gallery – but I don’t think any of them worked so that one’s probably discarded.

I would love to know why this is such a phobia for me, does anyone else suffer this aversion to planning? Is it just laziness? I don’t think so… a large part of me feels it as horror, a haunting of school days and of being put on the spot in front of the class to conjure up new ideas and answers that simply never came…