The Pressure of Handmade Christmas Cards 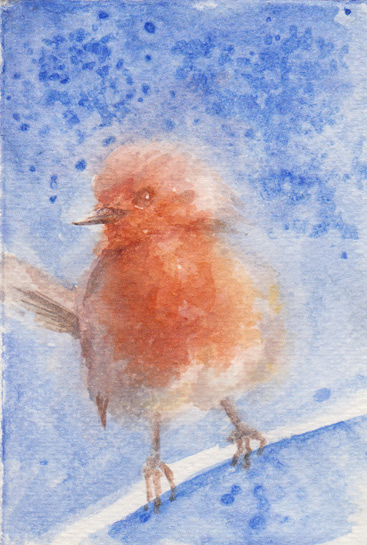 Before the weekend I was anticipating spending two whole days creating lots of Christmas Cards to send out to friends and family… I did manage to spend quite a lot of time painting, but a change in the weather and a change of watercolour paper made the results rather unpredictable.

Today we’ve celebrated our sixth day in a row of spectacular thunderstorms and thirty degree heat – I had forgotten how hard it is to paint when it gets hot over here, you have to be so much quicker! Despite many tries I’ve also really struggled to get a salt effect to work at all, probably due to the extra humidity. You can see here that the salt didn’t soak up the pigment to leave white starburst effects as you’d expect. Instead I’ve just got little dark blue dots… not exactly what I hoped for as a snow effect.

On top of that I started using some new watercolour paper for the first time: SAA’s own practice paper, 140lbs, rough. And I’m afraid I don’t like it very much – it ‘s a little less white than the Bockingford I’ve been using, and seems to carry less size as well, meaning that paint soaks in more readily and is harder to move around or lift off.

Despite all that this little guy is slowly coming along. His eye needs lots of work and a few other details need putting in, such as the branch, but it’s better than I expected after such a trial.